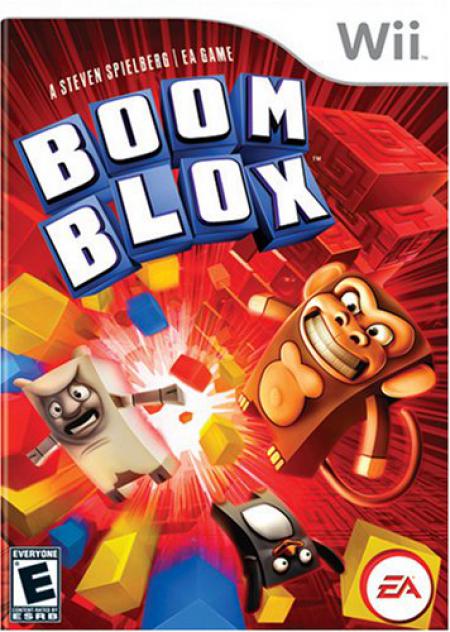 BOOM BLOX, is the first game developed in collaboration between two giants of multimedia entertainment, Electronic Arts and director/producer, Steven Spielberg. Spielberg is obviously a master storyteller and so knows a thing or two about blockbusters, but he also no stranger to the gaming world. A long-time gamer himself, he conceived the original idea behind Lucas Art?s PC/Mac title The Dig, but busting these BLOX is an entirely new concept.

Levels and Levels of Fun
A Puzzle/Action game inspired by Spielberg's own search for a game that he would enjoy playing with his own kids, BOOM BLOX is designed specifically with the strengths and versatility of the Wii in mind. In it players can look forward to a fast-paced gameplay blending the simplicity of the wildly popular block game Jenga and the crazy complexity of a Rube Goldberg machine--devices that although performing very simple tasks are designed to do it by the most complicated means possible.

BOOM BLOX features over three hundred levels, a variety of activities, a cast of over thirty wacky characters, and an easy-to-use in-game editor that allows players to express their creativity. It?s visceral gameplay is perfectly suited for the Wii?s interactivity. The action gets going fast and the fun never ends as you throw baseballs, blast lasers, save wacky animal characters, explore cool worlds and more!... making it the ultimate Wii blox-buster for 2008.

Endless Play and Replay Combinations
Built upon a full real-time physics model, each player's BOOM BLOX experience can be as easy or difficult as you want it to be. Additionally, players can remix any level of the game in Create Mode using props, blocks, or characters that have been unlocked during the game. Players can also virtually build anything they can dream up. This makes for nearly endless play and replay options in what promises to be the latest must-have Wii title for the entire family.