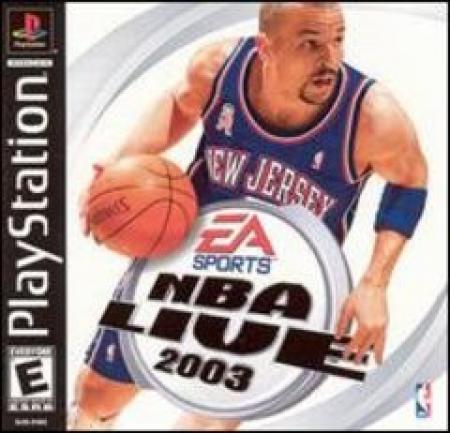 Set up a quick steal, explode on the fast break, drive to the paint or kick the ball back for a game-ending three. NBA Live 2003 promises gameplay with more hand control, smoother, faster action and NBA signature moves. And it's not just a shooting exposition. You'll find the huge "D" to smack back those dunk attempts and rattle the boards for key rebounds.

The latest incarnation of NBA Live has a slew of new features, like freestyle control, which lets you use the right analog stick to express your game with the step-back move. The game also offers triple-threat moves and pass interceptions. There are significant changes to the rebounding logic so players react in a more realistic manner to missed shots. Over 30 new rebounding animations allow for a wider variety of pulls off the glass. Motion capture, which was performed with two to four athletes simultaneously, is used for specific contact situations like post moves, pick-and-roll plays, and drawing the charge.

Enhanced CPU logic and AI allow for more effective fast breaks and open players who can cut to the hoop for scoring opportunities, as well as fine-tuned turbo buttons that afford players an array of in-game strategies. There are enhanced player movements, including dribbling, player-specific signature moves, and more responsive shot blocking. In addition, real NBA coaches roam the sidelines, and there is dramatic camera coverage of in-game and out-of-play sequences. You will hear what it's like to be on the court with all-new player calls, as well as court and arena sound effects. Classic jerseys give players a chance to relive their teams' glory days in authentic gear.