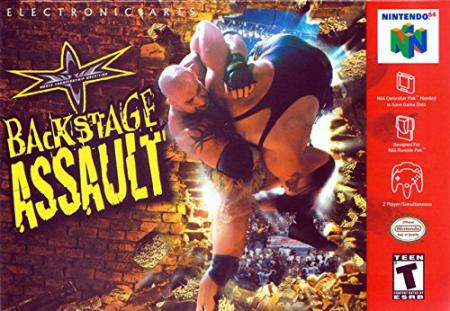 More than 50 WCW wrestlers, including women and managers, piledrive their ways through seven environments, each with at least two rooms. Since there's no ring, don't expect a ref to show up. With no spoil-sports in striped shirts around, you're free to use foreign objects to your heart's content.

Each room is packed to the brim with potential weapons. Urinals can be ripped from the wall in the Bathroom, podiums turn into bludgeoning tools in the Media Center, and pay phones make for perfect weapons in the Locker Room. Other potential tools of destruction include 2x4s, water jugs, metal pipes, weights, chairs, VCRs, televisions and even sinks. Fire, smoke, water, steam, electrical sparks and other interactive elements can damage wrestlers and venues alike.

Backstage Assault features more than 800 motion-captured animations, including some 300 reused from last year's WCW Mayhem. The move you'll see most often, though, is when one wrestler cracks another over the head with a trash can or a computer monitor. Each wrestler has quite a few moves at his or her disposal, but with so many weapons lying around, the matches generally consist of constant pipe-swinging.

Developer Kodiak Interactive (which also made Mayhem) tries to keep the action somewhat true to the sport by designing ring-like mechanics into the rumble rooms. In the Truck Arena, for example, wrestlers can bounce opponents against a pile of used tires instead of the ropes. While rule-abiding wrestlers normally launch attacks from the top turnbuckle, Backstage Assault brawlers opt to perch atop 18-wheelers or chain link fences.

Matches are won by either pinfall or submission, but players can earn extra bonus points and unlock hidden wrestlers by performing certain tasks in each arena. In the Truck Arena, you can unlock Vampiro by picking up a 2x4, setting it on fire, and then torching your opponent. Bonus points are earned in the Media Center by shocking the competition with a battered VCR.

By taking advantage of aerial opportunities, you can unlock moves for use in the Create-A-Superstar mode. Kodiak tries to encourage players to use different moves by providing a bonus for variety, but this probably won't stop gamers from constantly assaulting each other with items. In fact, you can actually earn bonus points for using all of the items in the room.

In Hardcore Challenge, you battle for three WCW championships: U.S., World or Hardcore. As you scrap your way up the ladder, you can unlock new venues and weapons. Superior performances are recorded in the Hall of Champions, which ranks you by title earned, number of matches won, number of replays used (the less, the better) and style points.

Hardcore Gauntlet challenges you to fight seven of the WCW's most daunting wrestlers without taking a single breather. Run the gauntlet successfully and you'll get your mitts on even more hidden WCW stars. Less grueling but more spectacular modes include First Blood (you bleed, you lose) and Human Torch Match (you catch fire, you lose).

We have to give EA credit for their willingness to go just as far overboard as the WCW script writers themselves. This game definitely has some serious shock value, and smacking Jimmy Hart over the head with a flaming 2x4 is undeniably entertaining. When the novelty eventually wears off (and for some players it may never completely fade away), Backstage Assault's unpolished graphics and surprising lack of a four-player mode are almost as damaging as a urinal to the back of the head.