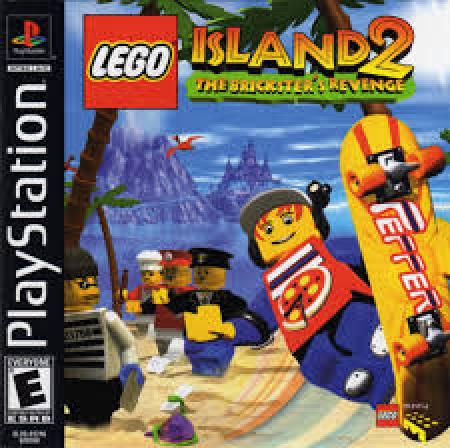 The action adventure continues...sequel to the bestselling Lego Island! The Brickster has escaped from jail and has stolen the Constructopedia! Now hehas the power to take LEGO Island apart brick by brick and only Pepper can stophim-but he needs your help! Explore the Mummy's Tomb and escape the gem-stealing serpents on Adventurers'Island. Pilot a space shuttle and ride a pterodactyl! Rescue trapped dinosaursand joust with a powerful knight! It's Pepper's most exciting adventure ever-will he stop the Brickster or will LEGO Island be destroyed? You decide!Your mission will be to save Lego Island from the chaos the Brickster iscausing leading to the deconstruction of all the homes and buildings. ExploreLego Island as you deliver pizzas and hang out at the skateboard park.Once the buildings have been rebuilt travel to Castle Island to joust with theDark Knight and scuba dive to retrieve valuable bricks. Immerse yourself in thepuzzles and amazing challenges on Adventurer's Island such as Matching Mummies.And prepare for the final showdown on Ogel Island.Achieve your ultimate goal to stop the downfall of Lego Island of LegoIsland.  Are you ready?Product Features Ride a dinosaur in the race against time. Escape the rolling rock as you uncover the secrets of the Mummies' Tomb. Face your final challenge as you lift-off for Ogel Island! Have fun traveling around Lego Island on your cool skateboard. Defeat the Dark Knight in a thrill packed jousting tournament. Dive deep to retrieve the bricks and repair the bridge to Castle Island. Prepare for your epic space adventure by mastering your sky-diving skills. Pilot a plane a boat or even a Pterodactyl when Island hopping.