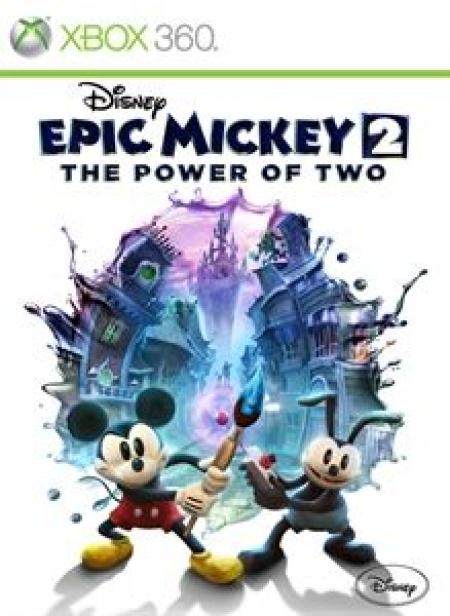 Disney Epic Mickey 2: The Power of Two is the sequel to Disney Epic Mickey. Just like the first game it is a platformer and the story picks up after the events of the first game. Oswald the Lucky Rabbit and the other characters from the Wasteland start rebuilding their world, when it is threatened by a series of earthquake. The Mad Doctor (always speaking in song) and Oswald team up, and Mickey Mouse, the protagonist of the original game, is brought back in the Wasteland world by Gus, the leader of the Gremlins, and Ortensia, Oswald's girlfriend.

In contrast to the first game, here Oswald and the Mad Doctor are on Mickey's side. Even more, Oswald becomes a support character for Mickey, as referenced in the title. He is either controlled by the computer or entirely by a different player. The game also supports a drop-in, drop-out system for the second player. As in the first game Mickey's most important way to interact with the environment is through paint and thinner with a reticule controlled separately. Thinner is used to rub out pieces in the environment, while paint can restore parts of the scenery. Paint can also be used to befriend or attack characters. Oswald attacks with a boomerang (using his arms) for ranged combat. He also has a remote control used to zap enemies or to charge items in the environments, and can take off his legs. In addition he can spin his ears to hover in the air and lift Mickey over gaps. He can also revive Mickey and be brought back close again with a group button. In many sequences the two need to work together to solve puzzles. For instance Mickey can drag fireworks to a specific spot and then have Oswald ignite it.

There are many different environments, such as a Western gulch, a spooky bog and the 1950s-style Autotopia. Next to the movement-based controls for the Wii and Wii U, the PlayStation Move peripheral is supported, but not Kinect for the 360 version. For the Wii U version the GamePad can display the map with hotkeys to zoom in or see the location of objectives. Off-TV play is not supported, as it uses regular split-screen for local co-op.