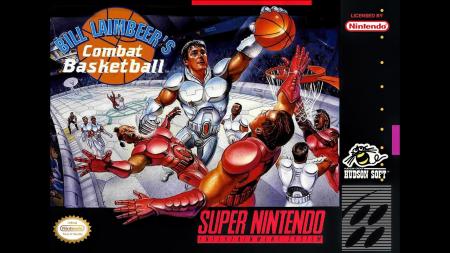 Bulls vs. Blazers and the NBA Playoffs
4.12

n the 1980's and 1990's, there was a legendary rough and tough bad boy of basketball. His name was Bill Laimbeer. Unfortunately, the league didn't like his style of playing, so they forced him to retire.
Now the year is 2030 and Bill Lamibeer has resurfaced as commissioner of the basketball league. He wants to get back at those people who made him retire, and play ball his style!
He's fired all the refs and eliminated all fouls. The players are armored, and the crowd throws weapons and mines on to the court.
"This is basketball my way," exclaims Laimbeer. "No wimps, no wussies! It's not just basketball. It's Comboat Basketball!"
- Fast one-on-one action! Play against the computer or a friend (1 or 2 players).
- Powerful league mode. Make your own team by buying and selling players. Up to eight people can play in the same league!
- Battery back-up lets you save your league, so you can play anytime!