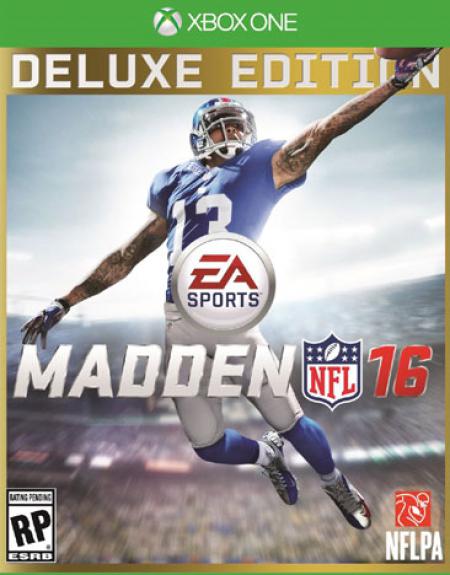 Be the playmaker with the Madden NFL 16 Deluxe Edition. With 36 Madden Ultimate Team Pro Packs including NFL super stars of the past and present and the pre-order exclusive Playmaker Pack, you%u2019ve never been more equipped to challenge the competition this Madden Season! Dominate in the battle for air supremacy with new QB mechanics including body-relative throws and touch passes providing unprecedented depth and control while under center. Whether you%u2019re building your legacy in Connected Franchise or competing at the highest level in Madden Ultimate Team, your Playmaker journey begins this Madden Season!

Deluxe Edition %u2013 Get 36 Madden Ultimate Team Pro Packs featuring NFL super stars of the past and present plus the pre-order exclusive Playmaker Pack. Pro Packs are granted 3 packs per week for 12 weeks starting on 9/1/15. Playmaker Pack is granted at code redemption, and will include a limited-time version of one of the Madden NFL 16 Playmakers!

Total Control Passing %u2013 Place the ball where only your receiver can get it with body-relative throws including high-point, low-point, and the ever popular touch pass.

Connected Franchise %u2013 Whether playing solo or online with friends, your quest to build an NFL dynasty begins with Connected Franchise. Interact and build your team with more control with Game Prep. Want to develop your backup QB? Between matchups, spend extra time on him each week to earn training points without having to force him into the real games before he is ready. Build your teams%u2019 confidence through performance and front office transactions. Balance keeping player%u2019s confidence up, to increase abilities and build player XP.

Madden Ultimate Team %u2013 Build your ultimate team with your favorite NFL players from the past and present while dominating the opposition in head-to-head seasons, solo challenges, and more. Earn coins to buy packs through the online store, where you can trade and auction off items on the road to building the Ultimate Team. Engage with the NFL year round thanks to live content and service updates in the fastest growing mode in Madden.

Skills Trainer %u2013 Skills Trainer will teach you not only gameplay skills, but strategy and football concepts as well. Learn how to read zone defenses, when to hot route a receiver, and more with nearly 50 tutorials and drills. Once you%u2019ve mastered the basics, enter The Gauntlet where your skills will be put to the ultimate test through intense challenges and boss battles.