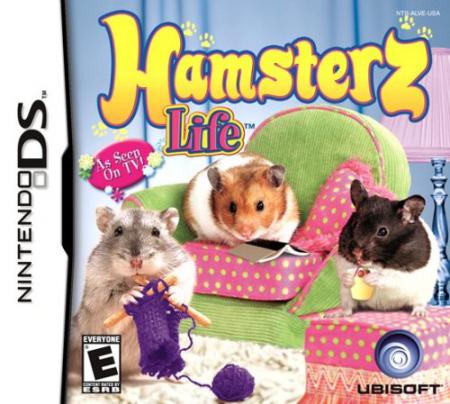 Following the tradition of the Petz series for PC, Ubisoft brings now the series to the DS. This time with hamsters. Like in other games of the series for the DS, the player has to care for his/her pet by feeding it, bathing it, brushing it and other such tasks. There are five different breeds to choose from and seven mini-games that randomly appear to give you food, costumes, toys and items for the cage where the hamsters live. And thanks to the wireless connection to other DSs, hamsters and other items can be shared with friends. The player can even store information on up to other 20 different owners. Due to its Japanese origin, there are plenty of anime art elements in the game, for instance, and many other Japanese oddities like the possibility to teach your hamster to talk or store the blood type of other players. In addition, in Hamsterz the main goal is to raise your hamster in order for him to make itself a complete "Ham-country" (sic.), where it can build plenty of buildings like a school, a bakery, etc., making this the game of the series where the pet can behave closest to an actual human.