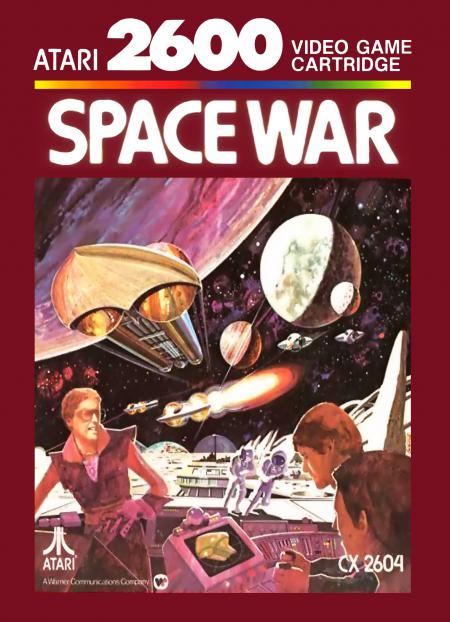 Space War for the Atari 2600 was among the first home adaptations of the classic mainframe game Spacewar!. The cartridge includes two different game modes: Space War and Space Shuttle. Space War is the classic one-on-one game of dueling spaceships and requires two players. The goal is to shoot down the opponent with missiles for one point per kill. Each player's ship carries eight missiles and a limited amount of fuel for its thrusters. Once the ammunition has run out, it is refilled automatically, but only if the other player is also out of shots. The controls follow the Spacewar!/Asteroids model of momentum preservation: once accelerated, the ship will keep flying in the same direction until its thrusters fire again. Seven different variants of Space War are available, each toggling different options: the screen boundary is either solid and ships and shots will bounce off, or it can be passed through and the ships and missiles will reappear on the other side of the screen. If hyperspace is available, a player can become temporarily invisible, which uses a lot of fuel and disables the guns, however. If there is a sun in the center of the play field, its gravity will pull the ships towards it and crashing into it will award the opponent one point. Finally, if a starbase is present, ships can fly by it to resupply fuel and ammo. Space Shuttle is a more peaceful game and in some variants can also be played by only one player. The goal is for the players' ships to dock at a fast-moving space module. To do that, speed and direction must be perfectly matched to the module. A successful docking maneuver awards one point. There are 10 different variants of Space Shuttle, toggling one- or two-player mode, solid screen boundary, presence of the sun and whether one or two space modules are available for docking.