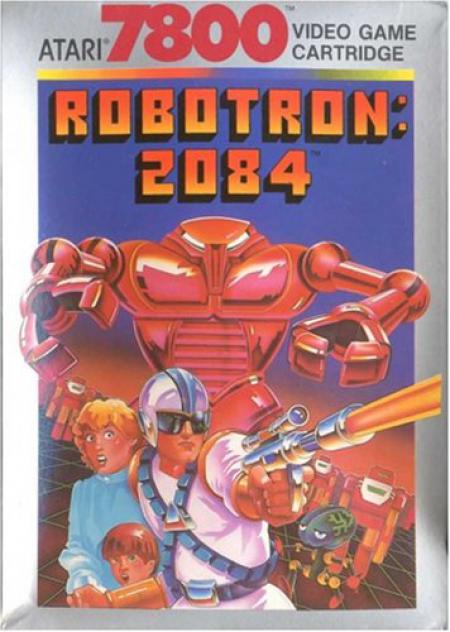 an arcade video game developed by Vid Kidz and released by Williams Electronics (part of WMS Industries) in 1982. It is a shoot 'em up that features two-dimensional (2D) graphics. The game is set in the year 2084, in a fictional world where robots have turned against humans in a cybernetic revolt. The aim is to defeat endless waves of robots, rescue surviving humans, and earn as many points as possible. The designers, Eugene Jarvis and Larry DeMar, drew inspiration from other popular media: Nineteen Eighty-Four and Berzerk. A two joystick control scheme was developed to provide the player with more precise controls, and enemies with different behaviors were added to make the game challenging. Jarvis and DeMar designed the game to instill panic in players by presenting them with conflicting goals and having on-screen projectiles coming from multiple directions. Robotron: 2084 was critically and commercially successful. Praise among critics focused on the game's intense action and control scheme. The game is frequently listed as one of Jarvis's best contributions to the video game industry. Robotron: 2084 arcade cabinets have since become a sought-after collector's item. It was ported to numerous platforms, inspired the development of other games, and followed by sequels. The game is considered by many to be an unofficial part of the company's Defender saga, including by many of its developers.