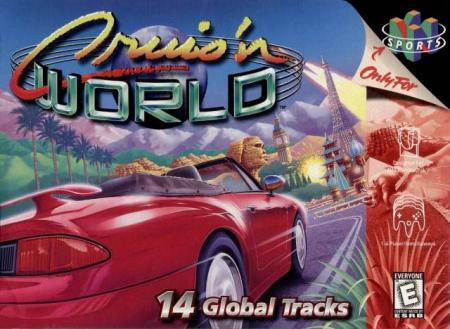 Pack your bags and prepare for a first class trip around the world. Your ticket is courtesy of Midway, who has transformed its arcade mega-hit Cruis'n World into an all-new racer for the N64. Cruis'n USA thrilled racers with a scenic trip across the highways of America, but this time the action will take you all around the world. Each track is packed full of realistic scenery and authentic landmarks, so playing this game could save you a lot of dough on travel expenses. You can catch a glimpse of the Sphinx, the Statue of Liberty, and the Mayan ruins without leaving the security of your living room couch. If you're looking for a realistic racing simulation with real world physics, then this is definitely not the game for you. The graphics are realistic, but the actual game play is twisted to the extreme. Even though blazing across the Great Wall of China may be unbelievable, it certainly is fun. You can leap-frog over a semi truck with a police car, or perform a back flip with a military ATV. Add to this a bonus race that takes place on the moon, and you have a good idea of Midway's over-the-top execution of the Cruis'n concept. There are three ways to play in Cruisin' World: Cruise the World, Championship, and Practice. Cruise the World Mode is very similar to the N64 version of Cruis'n USA, except this time around the courses are packed with international flavor. There are 15 tracks immediately available, and each race has a jammin' soundtrack with music that is appropriate for the region. You'll be noddin' your to French house music, or gettin' your groove on to a Mexican mariachi band. Championship mode takes place under the same global conditions, but the tracks are shorter and usually more difficult. You have to place in one of the top three positions to advance, so you will need a winning strategy. Check out our coverage of each track to gain an advantage over the computer competitors. The Practice Mode in Cruis'n World isn't designed to be ignored. Even if you're a skilled driver, you'll be flying down these courses to earn one of 12 secret cars. Most of the tracks have a target time which must be defeated to gain access to the hidden vehicles. Like GoldenEye, some of these times are so tough that you'll have to fight the urge to throw the controller across the room. Cruis'n World could open up the floodgates on an entirely new genre of driving games: freestyle racing. While fending off competitors and taking in the beautiful scenery, you can also pull off tricks by flipping off of ramps and jumping over other cars. There are four different tricks you can perform, all of which begin by tapping the A Button to activate a Turbo. If you use a Turbo while driving off of a ramp, you'll perform a Jump Flip. You can stick different tricks by launching off of a ramp on two wheels, or by using the Breaking Drift technique before hitting the jump. Don't limit yourself to ramps, though, because you can also use your Turbo to hurdle over other cars on the track. Rad tricks give you points, which can be collected and used to upgrade your vehicle and increase your power level. In addition to pulling off fat Mega Flips and Super Helis, you can also earn points by finishing in one of the top three positions. The higher your power level, the faster your car is able to go. You can work your way up through 5 different power levels, which will be a necessity if you want to go fast enough to unlock the secret cars found in the Practice Mode. Cruis'n World's point system and hidden elements provide a good deal of replay value, but one of the better aspects of the game is its four player capabilities. Racing against friends is always fun, and this game allows you to run your competitors off the road and Turbo over them. Pop-up is bit more prevalent in the multi player mode, but there is no noticeable slow down in the frame rate. Many of us will never get the chance to visit the Egyptian pyramids, let alone the opportunity to drive a screaming ambulance straight through them. Cruis'n World provides fun fantasy racing action, and the best thing about it is that you won't have to worry about your luggage getting left behind in Russia.