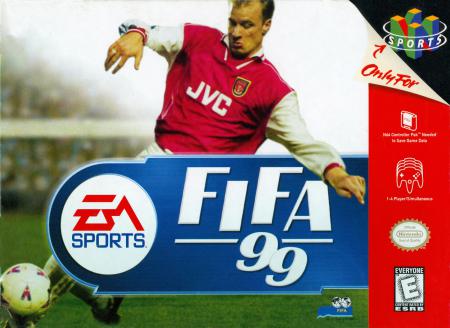 A lengthy evolution bears gorgeous results in FIFA 99, a meaty sim that ranks right up there with the best sports games, period. This is the fourth FIFA game that EA Sports Canada has developed for the N64, dating back to FIFA 64 in early '97. While that Pak's bright colors and gimmicky picture-in-picture option were clearly designed to appeal to younger players, the developers soon jettisoned the Crayola approach. The third entry in the series, World Cup 98, sported a subtle palette and, under the hood, a mind-boggling array of Team Management options that pegged it as a sim to be reckoned with. The trend toward sophistication gains steam in FIFA 99. Players now have different heights, which can make a big difference when going for a header. Increased shading makes the players more life-like. In-Game Management feature lets you set up three different formation/strategy combinations, then call them up in the heat of a match. With FIFA 99's IGM, you can configure individual lines in a flat, diamond or sweeper formation; reposition each player; call for an attacking, defensive or neutral approach; and designate who makes left corner kicks, right corner kicks, free kicks, spot kicks and penalty kicks. The full FIFA license has always been a big selling point for this series. In all, FIFA 99 comes packed with a staggering 250-plus clubs from Europe and South America, plus 42 international teams. While this is easily the biggest lineup of any FIFA game yet, fans of football exotica might be disappointed by the disappearance of the Malaysian club league and the dozens of minor international teams that populated FIFA 98: Road to the World Cup. While a salary cap prevents weak teams from loading up on superstars, the Team Edit mode makes it easy to move perennial powerhouse Real Madrid to bucolic Sinking Spring, Ohio. Fortunately, all the major teams are here, complete with their latest home and away uniforms. For contractual reasons EA Sports is not making a big deal about the available players, but rest assured, superstars like Roberto Baggio and Zinedine Zidane appear on both their national and club teams. Although Brazilian superstar Ronaldo doesn't appear in the game, ace striker Gabriel Batistuta stars for both Nintendo-sponsored Fiorentina of the Italian Serie-A and his native Argentine team. Instead of arcade or simulation modes, you have a choice of four aptly named game speeds: Normal, Fast, Faster and Fastest. You can also select from three difficulty levels, eight camera angles and half lengths ranging from 4 to 45 minutes. Interestingly, the clock always shows 45-minute halves, but runs much more quickly if you've picked a shorter period. International fans will appreciate screen text in six languages: English, French, German, Italian, Spanish, Swedish, Dutch and Brazilian Portuguese. Commentary from John Motson, Chris Waddle and Mark Lawrenson is extremely well timed. The music by Fat Boy Slim includes the new single Rockafeller Skank. You can set up seasons by mixing and matching any of the club teams. A Custom Cup options allows you to replay the World Cup. There are two exhibition modes: Friendly, which matches any two teams, and Golden Goal, in which two teams race to see which can be the first to score a preset number of goals. If all these options prove overwhelming, selecting the Quick Start option tosses you head-first into a match between England's Manchester United and Arsenal clubs. All those options would mean nothing if EA Sports hadn't backed them up with first-rate play control. Responsiveness, a concern in earlier FIFA games, is lightening-quick. New moves have been added, including chest trapping, fakes, jukes and in-air moves. Enhanced goalie AI gives you better control over your defense. The ball physics are generally realistic, although some of the caroms off headers seem mighty high. With a little bit of resourcefulness you'll get used to the menu system, which looks stunning but comes laden with the sorts of bizarre symbols more at home on a European train schedule. British lingo like "fixtures" and "kit clashing" are likely to leave Yanks scratching their collective heads. Given the total lack of Controller tips, navigating the menu requires an astrolabe and compass or at least an instruction manual. In short, EA Sports' FIFA series has come a long way from the spotty responsiveness of FIFA 64 and now stands toe-to-toe with Konami's International Superstar Soccer '98. While ISS '98's brightly colored menus and intuitive play control are ideal for players of all ages, FIFA 99's authentic players and clubs and high-end Team Management features peg it as a Pak aimed at mature players. One thing's for sure if you pick either Pak: You'll be a winner.