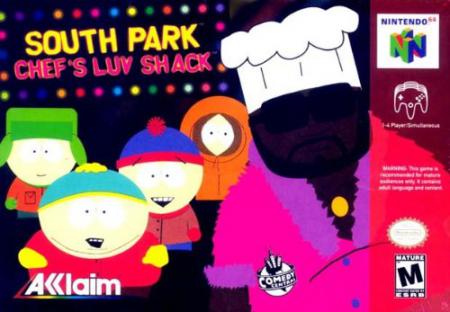 The host with most is sick and tired of servin' up slop. Despite the provocative title, Acclaim's latest trip to the town of South Park has absolutely nothing to do with romance. Although Chef would have probably preferred to star in a romantic first-person shooter, he has to satisfy himself with simply starring as the host of a quiz show called Chef's Luv Shack. One to four players can participate in Chef's Luv Shack, playing as Cartman, Stan, Kyle, or Kenny. Matt Stone and Trey Parker (South Park's creators) provided hundreds of soun bites for the game, and Issac Hayes delivers all Chef's off-color commentary. Famous for its commitment to free speech, Acclaim is making no effort to censor the choice language that gives South Park its comedic kick. As a result, Chef's Luv Shack has earned an "M" (Mature) rating by the ESRB. In addition to bizarre trivia questions that test your cache of useless knowledge, Chef's Luv Shack is packed with dozens of goofy and hilarious minigames. Not surprisingly, even the names of most of the competitions are too crude to be repeated here. If you're old enough to get in the door, South Park: Chef's Luv Shack is an entertaining Pak that will have you rolling with laughter. The one-player game is just as humorous as the four-player mode, but this Pak is definitely designed for parties. The game has no save feature.