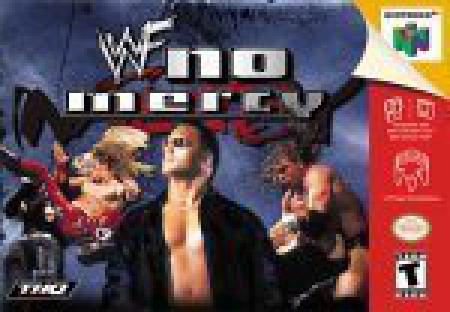 WWF No Mercy picks up exactly where Wrestlemania 2000 left off--it uses the same wrestling engine as its predecessor, only with more wrestlers, more match types, and other additions that will make hard-core wrestling fans devilishly happy.

For starters, there are 65-plus wrestlers, including old- and new-schoolers, tossed onto carefully copied sets like Wrestlemania and SmackDown. There are also new backstage areas, like the sharply detailed bar, which incorporates a pool table for optimal slammage.

New matches, such as the ladder match and guest-referee match, offer numerous possibilities, like using the ladder as a springboard, or ignoring pins when taking control of the official. Weapons also abound, and now these items can be hurled around, even from the floor to the ring, where they're likely to hit a clueless opponent. A story mode adds tremendous replay value to this one, giving players the option of turning good or bad, with a variety of consequences that are based on that decision.

As stated, the game plays just like Wrestlemania 2000--meaning the same degree of slowdown and questionable artificial intelligence. The slowdown particularly hampers the game when many wrestlers take the ring at once; it seems that this title pushes the Nintendo 64 to the limit, as far as on-screen action goes.