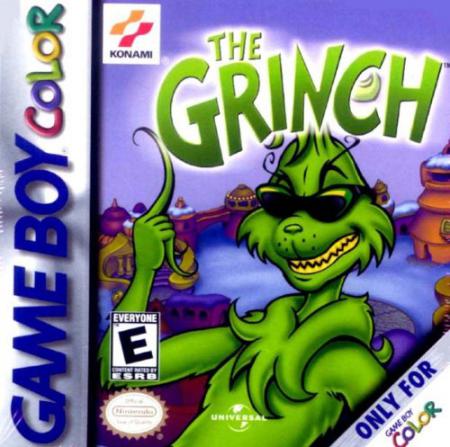 In The Grinch, you play as the Grinch--naturally. You must run all about Whoville, and steal Christmas away from the happy Whovillians. Each of the 30 levels of the game is structured like a maze. As the Grinch, you must negotiate the mazes, while staying out of the line of sight of any human being. If you steal everything in a maze without being seen at all, you win a bonus. To succeed, you must employ a number of attacks. Grinch attacks include throwing rotten eggs, and scooping and throwing snowballs. Also, you'll learn to beat a hasty retreat if you're discovered (the Whoville folk chase you only until they run out of breath). The simple GBC graphics bring back memories of older systems, but it's easy also to see the similarities between The Grinch and other games. Because it involves so much stealth, fans of Metal Gear Solid will draw similar parallels. The Grinch's near top-down view also will draw parallels with MGS's inset map screen. Being similar to MGS is no drawback; this is a fun, solid game. --Todd Mowatt