The Legend of Zelda: Oracle of Ages for Game Boy Color | Gamers Paradise

The Legend of Zelda: Oracle of Ages 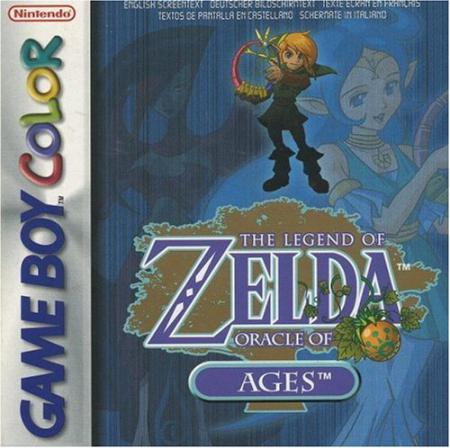 Nothing can stand in the way of Link's quest to save the day -- except maybe 400 years of time travel. Pack your bags and get ready for the trip of a lifetime. Since the Legend of Zelda was released for the original NES in 1987, the Zelda series has earned a reputation for delivering innovative action-packed gameplay mixed with engrossing storylines and unforgettable characters. The latest two games in this series, The Legend of Zelda: Oracle of Ages and The Legend of Zelda: Oracle of Seasons for Game Boy Color, build on this excellent reputation and add even more mind-bending gameplay elements to the mix. Each game presents a unique adventure for Link to conquer, but to get the most out of either game you'll want to play them both. It doesn't matter which Pak you play first. When you complete one of the games, you will earn a password which you can enter into the second game. When your new adventure begins, your character will have the same name you gave him in the first game. He will also begin the game with more items than in the first quest, and you'll be treated to cool cameos from some of the characters you encountered in the first adventure. At the end of your second adventure, you'll face an additional boss battle which would not occur if you had not already completed the first game. The Legend of Zelda: Oracle of Ages gives gamers more of the classic Zelda action which has made the series so popular, with a heaping helping of new concepts and puzzles. Link must travel around a vast overworld collecting clues and items, and explore challenging dungeons filled with fierce monsters and maddening puzzles. When Link's adventure begins, he uses the power of the Triforce to travel to a new land known as Labrynna. Veran, the Sorceress of Shadows, is planning to alter Labrynna's past so that she may rule over the present. Through trickery and deceit, Veran harnesses the power of Nayru, the Oracle of Ages, and travels 400 years into the past. Immediately, Labrynna's present changes dramatically, reflecting Veran's evil actions. Before the Sorceress of Shadows can complete her dark mission, Link must use the Harp of Ages to travel through time and recover the eight Essences of time. Time travel presents Link with some unique problems and puzzles. Many of the game's challenges require Link to travel from one time period to another in order to reach his goal. If a river is blocking your path in the present, for example, you can travel to the past and move a stone to redirect the flow of the water. If you plant seeds in the past, you'll find full-grown trees and vines when you return to the present. Also, Link meets some powerful friends in Holodrum who can help him in a variety of ways. A winged polar bear named Moosh can help Link attack enemies with a powerful ground-pounding blow, or Link can ride a friendly Dodongo named Dmitri across deep bodies of water. When Link rides in the pouch of a boxing kangaroo named Ricky, he can K.O. his enemies with a few quick jabs. Link's latest adventure offers great gameplay, an engrossing storyline and beautifully detailed graphics. Whether you're a long-time fan of The Legend of Zelda or a newcomer to the series, you're sure to spend many rewarding hours helping Link restore order to Labrynna.