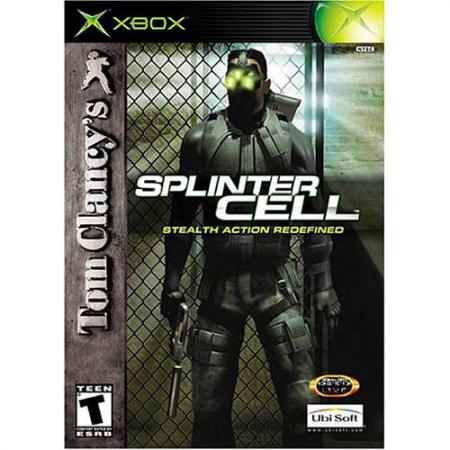 Splinter Cell is a third-person action game with a focus on stealth, similar to the Metal Gear Solid series. The player takes on the role of Sam Fisher, an operative for the secret organization NSA Black Operation, part of the U.S. government. The organization deals with very sensitive missions, often taken on by a Third Echelon splinter cell division Fisher is part of. His missions are so discreet, that if he is captured the government will deny any such existence of that organization. To get around and reach his objectives, Fisher has a variety of moves at his disposal. He can walk, run, crouch, jump, rappel, shimmy, cross horizontal wires, zip using a zip cord, and do a split jump. There are different approaches to taking out enemies. He can use weapons, but the noise might alert guards and that generally makes it more difficult to complete missions. Opponents can be stunned, killed, or subdued. Fisher can for instance jump down from the ceiling and knock an opponent unconscious. Some enemies are needed to activate a door or passcode. Therefore enemies can be taken hostage by holding a gun to their head. They can also be interrogated or be used as human shields. Other features include the ability to peak through a door before going through or use an optic cable camera (a "snake" camera) to peer through the underside, to check what is ahead. As the focus is on stealth, the amount of weapons is rather small. There is an FN F2000 assault rifle that can be fitted with a silencer and other modifications, and there is a suppressed FN Five-Seven pistol. Ammo is limited and additional bullets are scarce. Players are encouraged to avoid danger by sneaking through shadows and hiding behind objects. Fisher has access to a light meter to check how visible he is, and night vision as well as thermal goggles to see in the dark and view warmer temperatures in colour. Other weapons are ring airfoil projectiles, gas grenades and sticky shockers. The Xbox version is the original one, with a closely adapted version for the PC, and separate ports for PS2 and GameCube. The latter have slight changes in levels generally to make it a little easier. Each version also contains some exclusive features. The Xbox and PC versions include three additional downloadable missions (Tom Clancy's Splinter Cell: Mission-Pack). The PS2 version has an exclusive level, and the GameCube version can be connected with a Game Boy Advance through a link cable to view an overhead map. The PS2 and GameCube versions include additional binocular items, and the latter also has an extra sticky bomb weapon. The PS2 release also has an exclusive 5min pre-rendered intro cinematic with full orchestrated score, showing how the two agents you are sent to look for at the beginning of the game were captured.