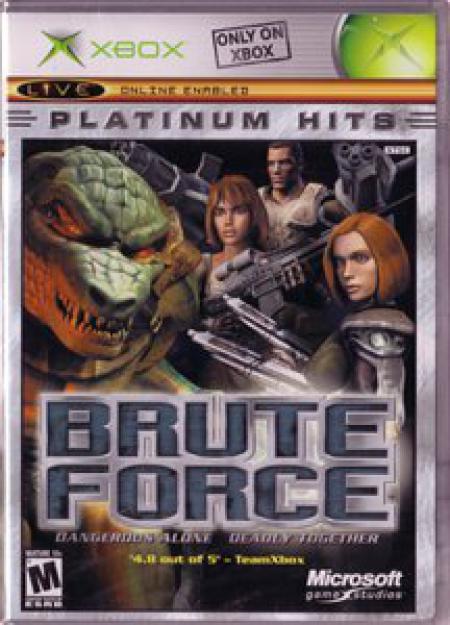 Take control of any one of four highly specialised super-commandos in Brute Force, a new action-packed sci-fi squad-based shooter game. Whether the encounter requires stealth, tactics, sniping or just Brute Force, the team is ready and able. Experience the intensity of a shooter game with the cunning strategies of team-based tactical combat. Play solo through six worlds in the extensive single-player campaign, or play co-operatively with up to 3 friends via split-screen or System Link. Battle it out in a multitude of competitive death-match modes with up to 8 players. Download new content including campaigns, mission and maps to keep the game fresh for incredible replayability. Simultaneous control of four distinct commandos. Gamers have complete authority over the universe's toughest commandos. Choose from a deadly sniper, the war-hardened assault trooper, a cunning scout or a feral alien. With the tap of a button, switch between commandos and select a squad member perfect for any combat situation. Each commando is uniquely qualified for different scenarios, and it is up to the gamer to determine how to best deploy their skills. Co-op and deathmatch multiplayer for up to 8 gamers via System Link: Play cooperatively with up to four players via split-screen or System Link. Snipe the enemy from behind while squad-mates blaze forward with the heavy stuff. With Dynamic Co-op, players can jump in and out of the game at any time (split-screen). Also, compete in an all out frag-fest with up to 8 gamers! Friends can battle it out against one another in a variety of competitive and team deathmatch modes. Downloadable Content: Gamers can download brand new missions and entire campaigns via Xbox Live, including both single player and multiplayer missions. The adrenaline rush continues on and on! Weapons and equipment galore: Gamers have their choice from a vast multitude of deadly weapons, equipment and gadgets. Equip teams with Miniguns, Sonic Cannons, Stealth Suits, Sniper Rifles, Psychic Blasts, and the like. Each weapon is specifically designed to take advantage of certain enemies and environments. Gamers must learn the strengths of each weapon to best exploit the weaknesses of their foes. Amazing next generation visual effects:Witness dazzling effects, dynamic lighting and gorgeous graphics beautifully rendered in different environments. See detail at a level you just didn't think was possible. Commandos grow in skill: Gamers can grow the skills and abilities of the commandos as they are used. Imagine developing a highly skilled sniper that can take out an enemy in a single precise shot, or the raw power of an assault trooper as he takes on an onslaught of enemies. Six challenging worlds: Gamers explore six different exotic worlds, each with a unique environment, enemies and gameplay strategies. Gamers will learn how to best use the unique abilities of the commandos to survive in each world. Awesome audio: Experience the incredible realism of Dolby 5.1 Surround as the environmental sound effects and music bring the world alive.